Elissa: how a second birth can heal a birth trauma

Elissia writes about her 2nd birth — about practical preparation and the healing powers of doing it your own way.

A little bit of a back story.

My first labor and birth was traumatic. I was in active labor for 36 hours and pushed for 7 hours. I was at a birthing center with a midwife and a „mehâ€ partner (so, basically by myself.) It resulted in a transfer to a hospital a town away where I had an emergency c-section. „Diagnosisâ€ was maternal exhaustion/failure to progress. I donâ€™t remember a single thing after the transfer, didnâ€™t see my daughter until 3 hours after she was born, my stitches tore open because the surgeon sucked, it got infected, they prescribed the wrong meds for the infection and I ended up needing a blood transfusion. Needless to say, I desperately wanted a different outcome with this birth… and I got it.

The start
On the morning of April 3rd I woke up to some mild contractions, but I had been having prodromal labor for weeks prior so I thought nothing of them and went about my day as normal. Around noon or 1 they started to become a little more strong and timeable, a better sign that it was for real but not the first time this had happened, so I kept John (my husband) updated and tried to keep moving around the house.

At around 2 or 3pm I had a contraction where I got the urge to squat into it and could really feel myself „opening up.â€ That was when I knew this might really be for real this time because it was something I hadnâ€™t felt before. I texted John and told him that he needed to come home and start setting up the pool. While waiting for him to come home, I put some towels down in the living room and labored on my knees with my little birth coach.

John arrived, put our sign on the front porch, and set up the pool. 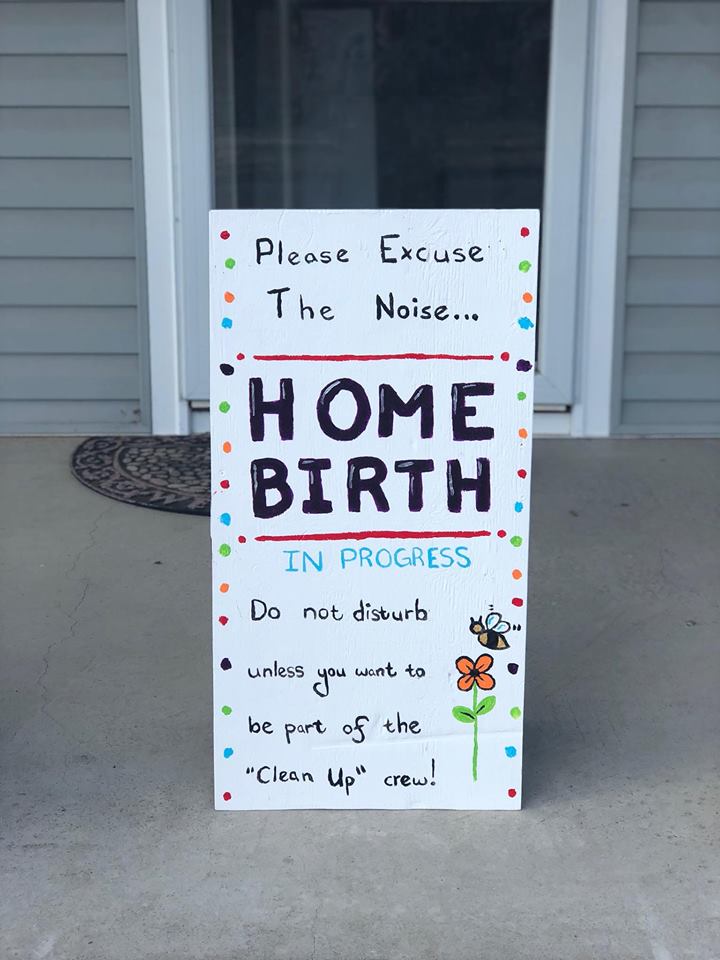 I climbed in and things started to get really intense. I had to grip the pool and breathe while rocking and REALLY focus through them. At this point Nova (my daughter) was screaming because she couldnâ€™t get in the pool with me and it was ruining my focus so my mother in law came to pick her up.

Labor steadily continued, contractions were still far apart at 5ish minutes but VERY strong. At 6:30pm a contraction came on so strong that I had that natural urge to push and in my mind I said „oh crap, no no no donâ€™t push. Not yet.â€ I had told John before that if that happens to encourage me not to push and let my body do all the work, and he did a great job of coaching me through my contractions.

However, the urge was so strong that my resistance led to me pooping in the pool without me trying. I was extremely devastated at this point because I knew my baby was close and John would not be able to clean up and refill it in time (it was not just a little bit, it was a lot, and it was not solid.) So he helped me out of the pool, I went to the bathroom, and then climbed into bed on all fours with pillows underneath my chest to prop me up.

I had severe- Symphysis pubis dysfunction- for the last half of my pregnancy and being on my knees was the only fathomably comfortable position. I told John to tell Holly (my best friend) to come over pronto. When she arrived I was right at that point where the urge to push was too intense to hold back.

John was at the headboard holding my hand and kissing me and encouraging me the whole way while Holly was in the back watching and coaching me as well. Every single contraction and push took every ounce out of me. I could feel his head drop and recede, over and over. My contractions were pretty far apart so I had the opportunity to rest in between pushes.

I started to say „I canâ€™t do it… I canâ€™t do it guys…â€ over and over and THAT was transition. That is when your baby is almost here. They both did so great encouraging me, telling me that his head was right there and he was so close to being in my arms. I was roaring and growling him out, grabbing the headboard like I was falling off of a cliff.

One big push and I finally got his chin out and felt that tremendous ring of fire. I didnâ€™t want to wait for another contraction to push his body out so I gathered my breath for one more push and his body came flying out. Holly caught him and said „ITâ€™S A BOY!â€

I just stayed on all fours crying. Not believing that I had actually done it…. I couldnâ€™t even move. It was a mixture of pain in my hips and adrenaline. I stayed on my knees for what seemed forever before I was able to turn around and finally see my baby. They helped me flip over and Holly put him on my chest and I just remember wailing „I did it. Oh my god I really did it. Heâ€™s so beautiful.â€

She told me she could see the placenta right there at the opening of my vagina so I gave a very gentle push and it came out, perfectly intact. Everything after that is somewhat of a blur to me as I was on that „birth highâ€ and I was in shock, pain, etc.

Aero came out so perfect. Perfect color, barely cried, latched right away, delayed cord clamping, surrounded by love, no unfamiliar sounds or smells. Just us, in our space. Everything I wanted. To this day I still canâ€™t believe how quickly and smoothly everything went, especially after the crazy labor and birth I had with Nova. This freebirth healed me.-